Studies on Veterinary Medicine, This compendium of research material on the role of oxidative stress in animal disease and morbidity examines both the general and the specific. 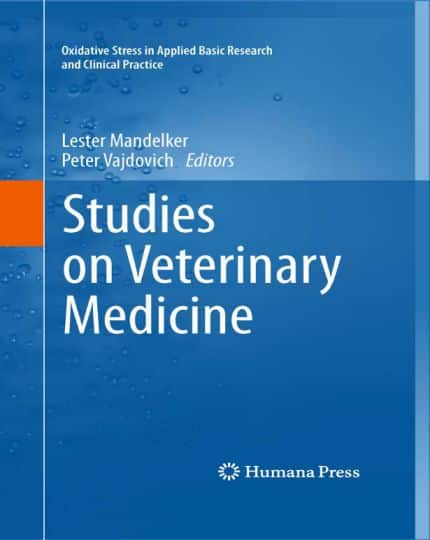 Sourced from scientists, veterinarians, and members of the medical community from around the world, it includes chapters on our wider understanding of the corrosive function of free radicals in cell biology as well as focusing on the interplay between oxidative stress and metabolism in a variety of animal species including dogs, ruminants and birds.

Since bio gerontologist Denham Harman first posited that free radicals arising from the metabolic activity of oxygen play a central role in aging and disease, a mass of evidence has accumulated linking oxidative stress and biological degradation. We now understand that living in an aerobic environment inevitably leads to the production of free radicals that go on to attack biological membranes and lipoproteins via oxidation in a process called lipid peroxidation. Reacting with carbon-based molecules such as polyunsaturated fatty acids, these free radicals cause oxidative stress and tissue damage.

The purpose of Studies on Veterinary Medicine is to inform clinicians, students and others of the plethora of consequences that free radical damage (ROS) has on various cells, tissues, and organs, as well as in different species of animals. The chapters also analyze the effects of oxidative stress on aging and various morbidities such as diabetes, cognitive dysfunction and heart disease. Contributors variously present their interpretation of the role played by oxidative damage in disease and assess the benefits of antioxidant therapies.

The purpose of this book is to inform clinicians, students, and others of the vast effects of free radical damage on various cells, tissues, and organs and in different species of animals. In addition, the effects of oxidative stress are analyzed in aging and various disease states such as diabetes, cognitive dysfunction, and heart disease. Each author presents his or her interpretation of the effects of oxidative damage in disease and in several species and the challenges in controlling oxidative damage with antioxidant therapies. We have compiled ideas and scientific information from scientists, veterinarians, and the medical community from around the world. This is surely a universal effort to promote further understanding of oxidative stress and its effects on various animals and organ systems. We would like to commend the authors for their vision and undertaking such a daunting task.