Practical Wildlife Care 2nd Edition, Great book on wildlife rehabilitation with information that can be translated to the care of any species. 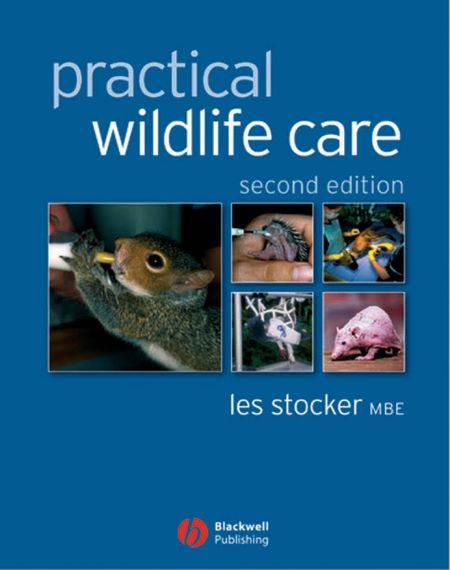 The ﬁrst edition of Practical Wildlife Care has been well received and well thumbed by many veterinary practices and rehabilitators, throwing a lifeline to many more wildlife casualties that other-wise might have fallen through the net. At the time of its publication all seemed settled in the ﬁeld of British wildlife…but every year has seen some trauma or other affecting the way we deal with wild animals.

Who can forget the awful year when foot and mouth disease blighted the countryside? Not many realised that the hedgehog, in particular, had shackles put on its movements. Rehabilitators and nurses, as always, found a way of treating their prickly patients making house calls, albeit in environmentally-secure space suits.

Britain’s bats have all of a sudden become rabies suspects but we have found a way around the barriers by getting ourselves vaccinated and once again making house calls, this time to collect bats so that nobody unprotected has to handle them.

The work life of wildlife care and rehabilitation is very much on a one-to-one basis, often scoffed at as a waste of time by numerically minded conservationists. But then it was revealed that Britain’s two most familiar birds, the house sparrow (Passer domesticus) and the starling (Sturnus vulgaris), had been put on the Birds of Conservation Concern Red List (Gregory et al., 2002). Their numbers had dropped so drastically over the last 25 years that they had joined the song thrush (Turdus philomelos) and the skylark (Alauda arvensis) on the slippery slope towards extinction. Now those individual sparrows, thrushes and skylarks rescued by the wildlife carer play a crucial part in the survival of what were once our commonest birds.