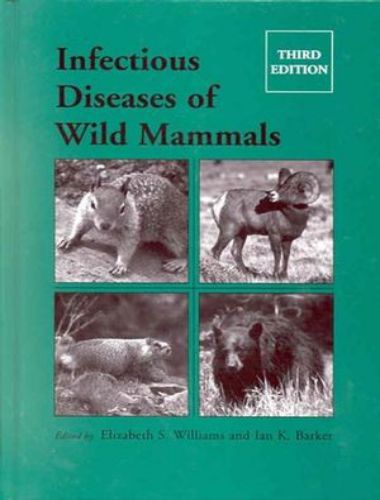 information on the diagnosis and treatment of infectious disease in both free-ranging and captive wild mammals. Editors Elizabeth Williams and Ian Barker have recruited 71 contributors, all noted experts in their fields, to update this new edition.

To us has fallen the humbling task of regenerating and updating this work, in collaboration with an international field of chapter authors. Our goal has been to summarize knowledge in the field of wildlife diseases relevant to wild mammals, in a form that will be useful to students in wildlife biology or veterinary medicine; wildlife biologists and managers; veterinarians dealing with free-living and captive wildlife; and epidemiologists and public health professionals concerned with wildlife zoonoses.

The format of the third edition follows that of its predecessors, with chapters arranged by taxon of infectious agent. They deal with agents established or suspected as pathogens in wild mammals, and/or transmissible between wild mammals and domestic animals or people. Many are capable of causing devastating diseases, such as tularemia, plague, or rabies, among wild mammals; almost all of these are capable of infecting domestic animals or people, as well. Other zoonotic agents, such as those causing the rodent-borne hemorrhagic fevers and Lyme borreliosis in people, have little or no impact on the wildlife that serve as the reservoir for human infection. Some well-recognized pathogens of domestic animals, such as canine distemper virus and parvoviruses, are emerging in significance or increasingly recognized in free-ranging wildlife.

Diseases such as brucellosis, bovine tuberculosis, rinderpest, and foot-and-mouth disease arguably are more strongly associated with domestic animals than with wildlife, but they pose some of the knottiest epidemiologic, management, and ethical problems where wild animals are affected. Some agents, such as the myxoma virus, rabbit calicivirus, and Salmonella, have been exploited as biologic agents of vertebrate pest control, with varying degrees of success and safety. Others, such as poxviruses and Leptospira, are functional or candidate recombinant vectors for the delivery of antigens to immunize wild mammals. The significance for wild mammals of agents such as Chlamydia and its relatives, and the retroviruses and mycoplasmas, seems relatively restricted, taxonomically and/or geographically, while others, such as the lyssaviruses, the poxviruses, Salmonella, and Leptospira, affect a wide array of wild mammals on most continents.