Human beings, animals, birds, insects and arachnids, and the inanimate environment are all involved in cycles of 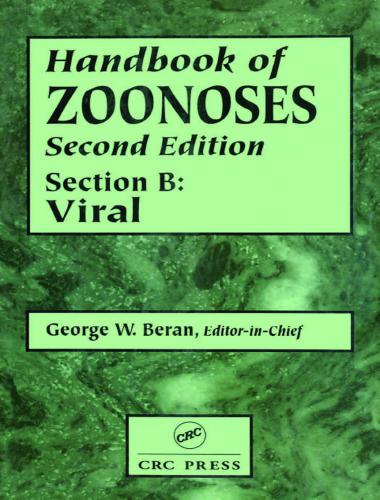 infection and intoxication of the zoonoses. The term derived from Greek zoon (animals) and noses (diseases) literally means diseases from animals. In this handbook series, infections and diseases are considered that are naturally transmitted between animals or birds and human beings. Transmission may be direct or through arthropod vectors or environmental foci. In some, the etiologie agents exist freely in the environment from which animal or human exposures occur. Foods of animal origin may be the source of infectious agents or toxicants to people.

The number of infections and diseases which can be classified as zoonoses varies from approximately 100 (99 of the 169 infections and parasitic diseases included in Control o f Communicable Diseases in Man, 15th ed., 1991) to approximately 3,000 (separately listing over 520 arboviral infections, over 2,000 salmonella serotypes, and over 200 leptospiral serovars). The importance of the zoonoses is based on their prevalence as chronic infections and incidence of new infections, the fluctuations which occur in the incidence of infections, the presence of high- risk individuals within populations, the difficulties or costs encountered in attempting control, and the emergence or new recognition of infections of unassessed potential. In this handbook series, 18 bacterial, 10 foodbome, 7 chlamydial and rickettsial, and 3 mycotic diseases are considered important for specific considerations in Section A, and 42 viral diseases for consideration in Section B.

Following an introduction for each zoonosis, consideration is made of its history, etiology, epidemiology, the disease in animals, the disease in human beings, its pubic health aspects, and references for further study.