Haematology of Australian Mammals is a valuable guide to collecting and analyzing the blood of Australian mammals for haematological studies and diagnosis and monitoring of disease. 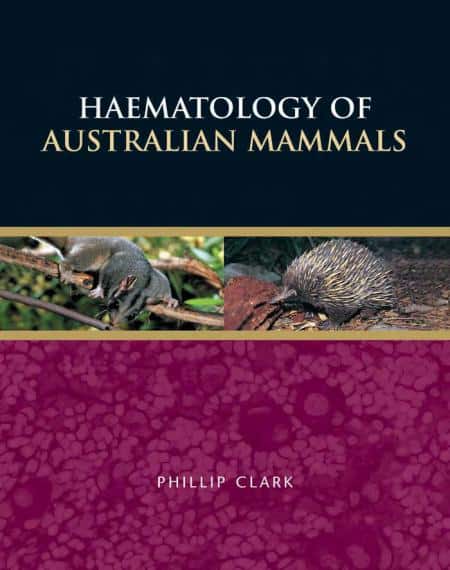 It outlines general principles for selecting sites for blood collection and for handling and analyzing samples to achieve quality results. Chapters then describe the morphology and function of haematological cells, with reference to the known characteristics of Australian mammals in health and the changes that may be encountered in response to common diseases. Haemoparasites that have been encountered in Australian mammals are discussed next, along with comments on their pathogenicity.

Lastly, haematological values from previously published studies are compiled into species-specific tables, providing a convenient reference to compare to the results of clinical cases. Written descriptions and colour photomicrographs of haematological cells from more than 100 species aid the identification of cells and the detection of abnormalities. Information is provided throughout for representative species from all the major groups of native Australian mammals including monotremes, polyprotodont marsupials, diprotodont marsupials, rats and mice, bats and marine mammals.

Analysis of a sample of blood provides a convenient, minimally invasive and often intriguing insight into the physiology and health status of an animal. However, surprisingly few scientiﬁc studies have assessed the haematological characteristics of Australia’s mammals. Most of these studies have established reference intervals for selected haematological analytes, some in relation to varying physiological factors, and only a very few have investigated the haematological changes that occur in response to disease.

The material for this book was largely obtained from samples collected as part of the investigation of health status (either routine monitoring or in response to illness) of animals maintained in captivity and a small number of samples were obtained from research projects. Consequently, it was not possible to obtain samples from every species of Australian mammal. However, I have endeavoured to include species representative of all the major groups of Australian mammals, including monotremes, marsupials, rodents, bats and marine mammals. In addition, the characteristics of blood from some ‘non-Australian’ species have also been considered; typically, these are a closely related species to those found in Australia (such as tree kangaroos from New Guinea) or have signiﬁcant instructive value. (A list of species mentioned in this book and their scientiﬁc names is given in Appendix 1.)