Ear Diseases of the Dog and Cat

Ear Diseases of the Dog and Cat, Studies of disease prevalence in dogs and cats, particularly those based on hospital admission data, suggest that ear diseases are common.

Ear Diseases of the Dog and Cat 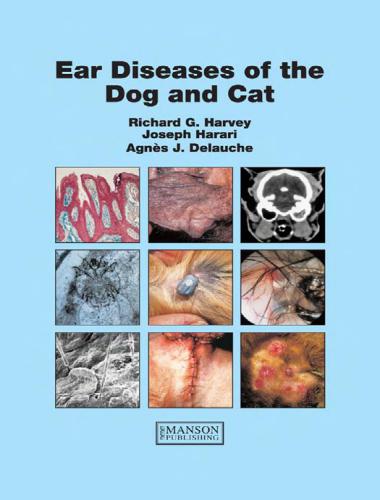 Estimates of the frequency of presentation range from 7.5–16.5%for dogs and 2–6.2% for cats. However, although Grono noted a presenting frequency of 4.8% for dogs, in line with other estimates, he also noted that the incidence of otitis externa detected during clinical examination of these dogs rose to between 16% and 25%. Thus, the ability of an owner to detect otitis externa does not appear to be very good. This has implications for treatment since chronic otitis results in permanent stenosis of the lumen and this is an indication for surgery.

The majority of the dogs and cats presented to veterinarians for ear disease will have otitis externa, often as a consequence of an underlying disease. While early reports suggested that there was no sex predisposition for otitis externa, statistical analysis of a very large study detected a significant predisposition in male dogs, although this was unexplained. Peak incidence in dogs occurs between one and four years of age 6. Male dogs of this age group are likely to be very active and may be at increased risk as a consequence of swimming and from otic foreign bodies. The clinical signs of atopy, a major underlying cause of otitis externa, also exhibit peak incidence in this age group.

It is readily apparent that the investigation and management of ear disease, in its broadest sense, will occupy a significant proportion of a veterinary clinician’s time. The concept behind this book is to provide a comprehensive source of information on the structure, function, medicine, and surgery of the ear, from Otodectes cynotis infection to acquired conductive deafness.