Companion Animal Zoonoses PDF.  The concept of zoonotic diseases, those that can be transmitted from animals to humans, has been understood for centuries. 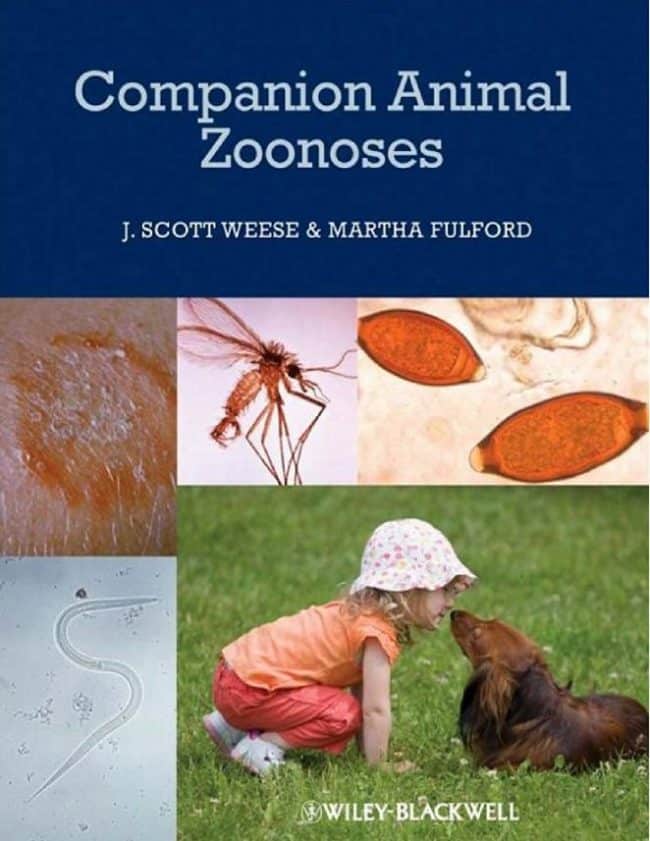 Some of the oldest recognized and most devastating infectious diseases have been zoonoses, such as the bubonic plague, and zoonoses have played an important role in human history and development. Traditionally, the main focus has involved food animals, food, water, and wildlife as sources of zoonotic infection. While certainly of importance, those areas do not encompass all zoonotic disease risks, particularly as people in developed countries distance them-selves from food animals and nature, and increase their contact with pets.

Companion animals play an important role in the lives of many individuals and are often considered to be members of the family. The majority of households in many countries contain pets, and a large percentage of the population has periodic, if not regular, close contact with a variety of companion animal species. As with any contact between individuals, every animal – human contact carries an inherent risk of pathogen transmission. While the risk is low in most situations, companion – animal – associated zoonoses certainly occur and can range from mild to fatal. Despite the role of copanion animals in peoples ’ lives and the risk of disease transmission, the ﬁeld of companion animal zoonoses is one that has only received limited attention in veterinary medicine, human medicine, and public health, with attention being focused on a limited range of pathogens such as rabies virus.

There is no standard deﬁnition of a companion animal , and one could successfully argue that some farm animal species, particularly horses, are also true companion animals. This book, however, is restricted to discussion of issues surrounding household pets, because of the vastly different issues involving species like horses. We had a more difﬁcult time deciding on what household pets to include, as the proliferation of exotic animal species has resulted in diverse types of animals in house-holds.

We chose to restrict the focus of this book to common household pets, particularly dogs, cats, rabbits, “ pocket pets ” (mice, rats, hamsters, gerbils, and guinea pigs), and common reptiles (turtles, nonvenomous snakes, lizards). Other animal species are included periodically in reference to speciﬁc issues or past outbreaks, such as the monkey pox outbreak in the United States that was associated with prairie dogs. Purists may argue that “ humans are animals too, ” but for the purposes of this book, “ animals ” refers to animal species other than humans.