Animal Breeding, Welfare and Society, The determination of when, how, how often and with whom an animal breeds is moving rapidly away from evolutionary pressures and towards human purposes. 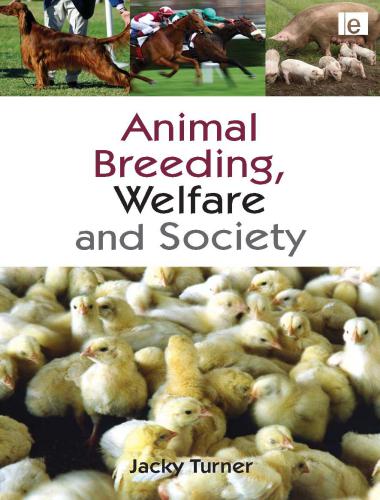 These include the breeding of around 50 billion mammals and birds for food production annually, the breeding of pedigree dogs and cats, racing dogs and horses, specialised laboratory animal strains and the use of reproductive science to conserve endangered species or breeds and to limit unwanted populations of pests and non-native species. But the ethics and sustainability of this takeover of animals’ reproductive lives have been insufficiently examined by either professionals or the public. This book discusses the methods, the motivations and the consequences of human intervention in animal breeding in terms of animal health, behaviour and well-being. It explores where we are now and the choices ahead, and looks to a future where we have more respect for animals as sentient beings and where we could loosen the reins of reproductive control.

This may be the century when the human interaction with non-human animals on the planet, direct or indirect, moves from management to absolute control. Selective breeding and the application of genetic and reproductive technologies are probably the most important ways in which we exercise this control. The determination of when, how, how often and with whom an animal breeds has moved ever further from natural selection and ever nearer to human purposes and human choices: these include the breeding and use of around 50 billion domestic mammals and birds for food production annually, the breeding of pedigree dogs, cats, racing dogs and horses, and specialized laboratory animal strains. The expansion of human activity to nearly every global environment and every animal habitat means that we find ourselves taking ever greater control over wild animals too, either to preserve or to manage their populations.

Reproductive and genetic technology is already used in the breeding of endangered species in zoos and to maintain genetic diversity in small populations of endangered, rare or traditional breeds and species. These technologies are beginning to be used to limit what we judge to be the overpopulation of particular wild species and to control populations of pest and non-native animals when these conflict with human goals.

Animal Welfare in a Changing World