African Horse Sickness (AHS) is a profoundly irresistible highly infectious, vector conceived viral ailment influencing all types of Equidae. It is named an Orbivirus of family Reoviridae, of which there are 9 serotypes. All serotypes are conveyed all through Africa, despite the fact that there is a variation in their distribution. It is endemic to the African mainland, and is portrayed by respiratory and circulatory damage, characterized by fever and loss of appetite. The disease shows in three ways, specifically the lung form, the heart form and the mixed shape.

The lung (dunkop) form is portrayed in the following way:

The heart (dikkop) form is described in the following way:

This ailment is spread by creepy crawly vectors, for example, midges however can likewise be transmitted by types of mosquitoes including Culex, Anopheles and Aedes, and types of ticks, for example, Hyalomma and Rhipicephalus. 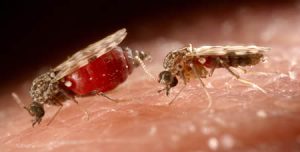 There is at present no treatment for AHS.

Control of episode in an endemic regions includes quarantine, vector control and immunization.